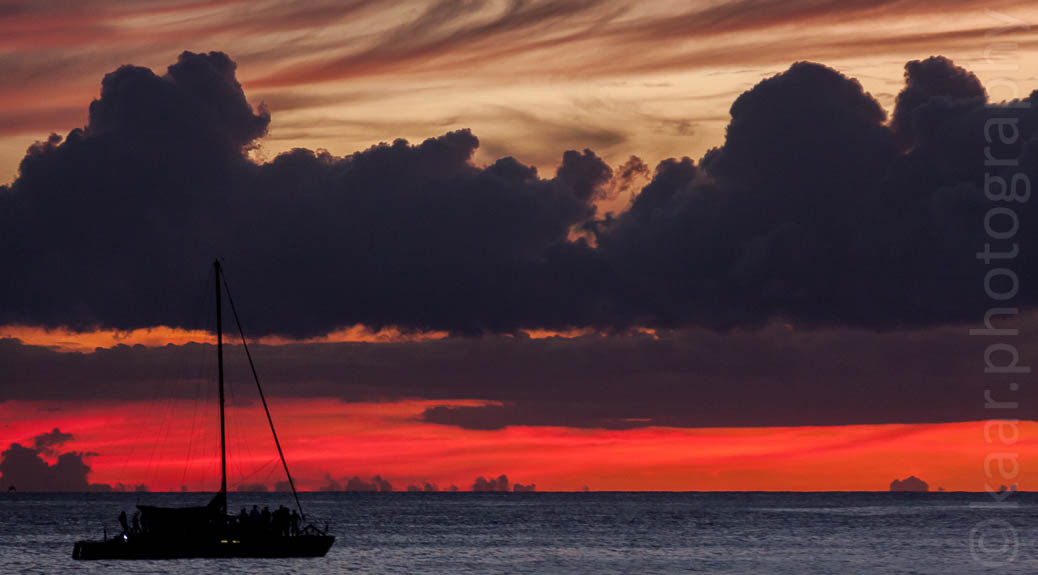 Stay tuned for the pics, but here are some basic thoughts:

Any time of the year! Let me rephrase that. Several times a year!
The weather is pretty much the same all year round although during the winter (northern hemisphere) it gets colder at night. Bring a sweater or light jacket for the New Years Eve fireworks, it could get cool.

Anyway. There are seasonal differences, beyond decorations. Whale watching is possible from December to March, especially north of Oahu and between Maui and the Big Island. Experienced surfers might enjoy the winter months due to the rougher sea whereas for snorkeling (and maybe scuba) the smoother ocean during the summer months is easier. Generally speaking it doesn’t matter; besides the Whales.

Hawaii has four major Islands (from west to east): Kauai, Oahu, Maui and Hawai’i (a.k.a. Big Island). This sequence also applies to the island’s age.

Oahu – for being with lots of people, shopping & surfing

For the impeccable Hawaii experience you probably don’t need any. Ask the locals for a nearby beach, get cocktails and Hawaiian ale at the bar downstairs and hang loose.

If you are into exploring and can’t sit still anymore after a few hours sleeping in the sun, the ultimate guidebooks would be “The Ultimate Guidebook” series by Andrew Doughty which provides a book for each of the four major islands. Highly recommended! Be prepared for a very diversified trip, much more as you would expect. Spoiler alert: Hawaii features 11 of the world’s 13 climate zones. Intrigued?

Of course there is pretty much no upper limit on what you can spend per night. All well known hotel brands have their resorts at the most beautiful beaches. But that shouldn’t worry you. There is no such a thing on Hawaii as a private beach. If you run into a gate while accessing a beach, ring the bell (there is always one) and ask for beach access. Don’t be shy!

But back to lodging. Besides the obvious we have been using vacationrentals.com and homeaway.com. When you plan to extensively stay in the area around your rented home you probably want to choose western above eastern shores since they generally provide a more stable weather.

In short: rental car. There is a bus system TheBus on Oahu which is not that bad from a coverage perspective. Ask for a transfer ticket when you leave the bus. Whereas we received splendid feedback from others, we found it pretty unreliable. Annoying, but that’s the stories you write as a traveler. There is plenty of rental car opportunities and the price is about the same as on the mainland; also for gas.